Something on Your IMDB You Can Feel Proud of 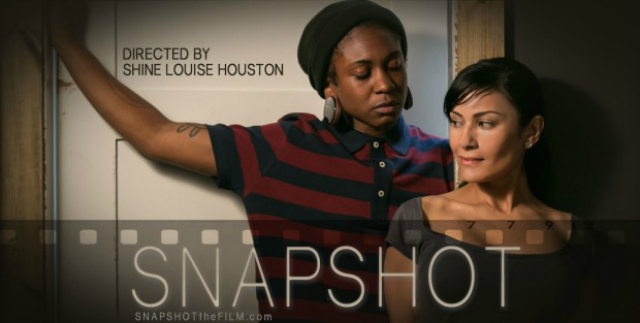 “Growing up queer, I was always frustrated with the coming out stories I was hearing and seeing: there were so few queers of color, the representations’ idea of ‘sexy’ wasn’t mine, narratives were formulaic and stereotypical,” Houston writes. “SNAPSHOT is an attempt to provide a different coming out narrative in a tone that reflects some of my most profound filmic influences. It involves two women of color as its main characters. The character whose ‘coming out’ is in focus is in her late 30s — and her coming out has to do more with the intricacies of new desires than with gender.”

The movie opens with Charlie, who discovers she may have captured a murder while taking photos around San Francisco. On her journey to unraveling the mystery that her lens captured on that day, Charlie meets Danny, an older woman with whom she feels an undeniable chemistry.

“The traditional [coming out] narrative usually involves a younger protagonist coming into maturity or sexual revelation,” Houston adds. “However it is our older character, Danny, who embraces a new way of being as a result of meeting Charlie and being exposed to her unfamiliar desires.”

The murder in SNAPSHOT is both a plot devise and a symbol, but the mystery itself, Houston admits, is a MacGuffin. Ultimately, SNAPSHOT is a film about desire, a coming out story that winks unabashedly in the general direction of the classic Alfred Hitchcock film Rear Window and Michelangelo Antonioni’s 1966 flick Blowup.

Cameos and credits for associate producer, producer and executive producer are up for grabs. You’ve been needing something on your IMDB to feel proud of.