Your Birth Control Sucks. Let’s Do Math to It

* It has been rumored that thinking about mathematics can cause women’s uteri to migrate uncontrollably. It may also lead to bicycle riding and the wearing of pants, and thence to the collapse of Western civilization. You have been warned!

So for those of you who have not yet run away in abject terror, let’s take a look at these lovely graphs produced by Gregor Aisch and Bill Marsh at the New York Times, showing how likely various birth control methods are to fail. They bring up an important point: normally, when you hear about the success rate of some method, it’s given to you as two numbers — the probability of failure per year when used perfectly, and the probability when used “typically.” The difference between the two can range from minor to catastrophic, as you can see from the graphs. The dotted lines are “perfect,” the colored ones are “actual”: 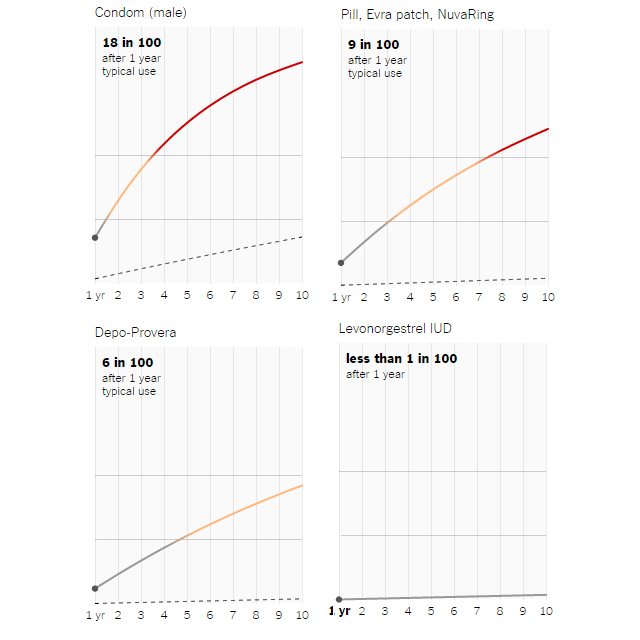 These graphs show failure rate of the four most popular methods of birth control among women in the United States (excluding female and male sterilization) after one year. To see more graphs — and interact with them to see how failure rate changes over time — take a look at the original article. But let’s do some math first.

Now: most people don’t just have sex for a year and then decide it’s not really for them; most people are happily shtoinking away for decades at a stretch. And in that case, you might ask yourself, what are the odds that this system will fail after ten years? At first, you might make the obvious naïve guess, that it’s ten times the odds of failure per year. But something’s obviously wrong with that, because (for example) the rhythm method fails 24 percent of the time in a year, so that would give you a 240 percent chance of having a child in a decade. While this may put you on a good path to having the 2.4 children of a typical family, it doesn’t sound like actual probability theory.

So let’s do the math properly, and then let’s talk about birth control methods. This math is useful because once you know the basic methods of probability, you can use them for all sorts of things. (Mathematicians often use “giving someone a lesson in probability theory” as a euphemism for “cleaning them out at blackjack,” for example. I promise that’s not what I’m going to do below.)

Now, let’s say that we want to find out if your birth control will work for ten years. You go to the manufacturer and find that there’s a probability “p” that it will fail each year (for example, 0.02 for a perfectly-used male condom, or 0.18 for a “typically” used one). Now, what’s the probability that it will succeed for ten years straight?

Note that this is almost the naïve guess of A+B: there’s just that extra term, – AB, which basically comes from the fact that if both A and B trigger, then it only counts as triggering “A or B” once, but A+B counted it twice. If A and B are both numbers much smaller than one, say they’re each 0.01, then A*B is even smaller — 0.0001 — and so you can ignore it. But when the total probabilities start to get close to 1, this makes a difference.

WHAT DOES THIS MEAN FOR YOUR CHOICE METHOD OF BIRTH CONTROL

So now, having done some math, let’s talk about sex. (This is also the point where I’m going to upset you by telling you that your favorite method doesn’t work. Sorry.) The numbers below come from the manufacturers, who have a fairly good reason to want the failure rates to come out low — but even they can’t make them look great.

In fact, we can break these methods into four groups by eyeball (all contraceptive methods listed are linked to the safer-sex education site Bedsider, which offers quick summaries of what they are and how they work):

The ones that reliably work: hormonal implants, intrauterine devices (known as IUDs, which include both Levonorgestrel and copper), and sterilization, obviously reliably work, even after ten years. Hormonal implants have only a 1 percent failure rate even after that long. More importantly, these methods show no difference between the “used perfectly” and “used normally” graphs, something which I’ll come back to in a moment.

Some things to be aware of with these methods: sterilization is not, generally, reversible, so if you only want temporary birth control these two are out. IUDs have some rare side effects which you should talk with your doctor about — however, the horror stories that you may associate with them have to do with the very early models made in the 1970s. This was resolved 40 years ago, and today they’re considered very safe. Hormonal implants have an extremely low rate of side effects, and are the most reliable of all.

A marketing executive from these companies will tell you that these work wonderfully. Speaking as an engineer, this is utter bollocks. A system that works well when operated perfectly and fails completely when anything isn’t operated perfectly is basically the textbook description of what a safety system isn’t. And in all of these cases, “perfect use” is a much tighter definition than you may be expecting: failure to take a pill at the correct time, or not realizing that another medication that you (or your partner!) is taking cancels out your pill, are the two most common kinds of “imperfect use” which move you from one curve to the other curve. A large fraction of all oral and topical antibiotics will cheerfully deactivate most oral contraceptives, for example.

They do have their upsides — for example, the Pill can be more easily tuned (trying different prescriptions) to find the one that works best with your body. But if I tried to sell you a car and told you that, so long as you keep it in perfect maintenance (you always check your tire pressure before each drive, right?) the brakes will work just fine, you would be awfully suspicious of me. For a good reason.

This brings us to the methods that “work” in only the most abstract sense of the word: Withdrawal, the “rhythm” method, and the male and female condom are sort of like the previous category — they work much better when they’re done perfectly. Unlike the previous category, though, even when they are used perfectly they’re incredibly unreliable: in perfect use the best of them (the male condom) will still fail 18 percent of the time after ten years.

These methods are also the ones most famous for not being used properly, because “perfect use” isn’t as simple as it seems. For the male condom, that means storing the condom at the right temperature range and replacing it regularly, avoiding any (even indirect) genital contact before putting it on, using correct lubricants, not using it for too long, withdrawing immediately after ejaculating, bracing the base of the condom properly during withdrawal, and making sure that no semen gets anywhere (including on your hands) during the clean-up process.

In short, these are not good methods at all for avoiding pregnancy. However, two of them — the male and female condom — are good methods for avoiding sexually transmitted infection (and in fact, they are the only ones on this list which will do anything at all about that!) and so there is very good reason to use them. However, if you’re serious about preventing pregnancy, you should use them in addition to other methods, not instead of them!

The other two methods on this list — withdrawal and rhythm — are not serious methods for avoiding pregnancy; at best, they are methods for reducing its frequency. However, the rhythm method in reverse, also known as the “basal-temperature method,” is the best place to start when you’re trying to get pregnant.

And finally, we have the methods that do not, in any meaningful sense of the word at all, work: Spermicides, the sponge, and the diaphragm are absolutely terrible at preventing pregnancy. I have to admit that I’m impressed that anyone is willing to market, as birth control, something that when used perfectly has an 89 percent failure rate over ten years. That’s not an advertisement for birth control; it’s an advertisement for a fertility treatment.

Also, none of those methods protect against STIs. There’s no upside.

WHAT DOES THIS MEAN FOR YOU?

If you’re trying to avoid becoming pregnant or getting someone else pregnant, then by far your best bet is hormonal implants, sterilization, or the IUD. Unfortunately, only one of these is available for men right now, and it’s the non-reversible one, but people are working on it and hopefully we’ll have some improvements soon.

The various methods in the middle are significantly flaky, but if you combine enough of them, they can work. (Again, you can do this with probability theory. Say you use both a condom and the Pill, both “typically.” You’ll only get pregnant if both fail — so the probability of that in a year is 0.18 * 0.09 = 0.016. After ten years, our previous formula then gives a total failure rate of 15 percent, compared to 86 percent and 61 percent for using them separately.) Don’t rely on any one of them alone.

Header image by Ernesto Andrade. A version of this piece originally appeared on Google+, and was reprinted here with permission from the author.