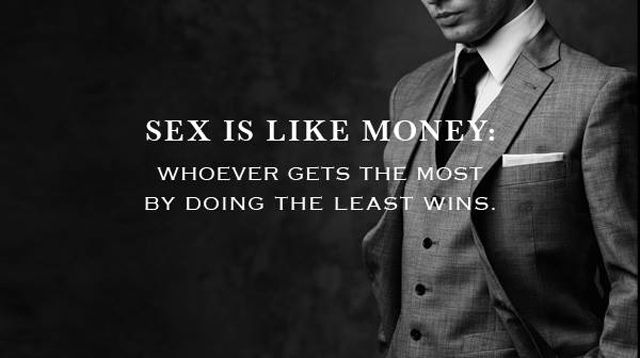 Amid calls to halt the season’s consumerism and face the racial problems that continue to plague our country almost 150 years after the Civil War, the marketing department at Lelo has decided that there’s no group more deserving of their attention than the disgraced (not to mention predominantly white) banking industry.

This news might have read as a political attack had the press release not made it abundantly clear how desperately out-of-touch the international pleasure company is.

“Pino is the first pleasure object ever created to satisfy the hedonistic sexual cravings and excesses exhibited by members of the financial world,” reads copy written by people still trapped in the 80s, somewhere between Ingeborg Day’s 9 1/2 Weeks and Tom Wolfe’s The Bonfire of the Vanities. The government bailouts of financial institutions in 2007 and 2008, the foreclosure crisis of 2010, the resulting Occupy movement — none of these things exist in their suspended reality.

In a completely tone-deaf reference to the American Recovery and Reinvestment Act of 2009 that was passed to alleviate the shockwaves of the Great Recession, Steve Thomson, head of marketing for Lelo, called the new $159 cock ring “the ultimate stimulus package.” Get it? Package?

Cue 99 percent of the population staring in complete disbelief.

“Bankers demand to be both the best inside the boardroom and the bedroom,” the press release elaborated, seemingly unaware of the $39 million settlement that Bank of America agreed to pay to some 4,800 female Merrill Lynch employees who endured the systemic sexism of the bank’s brokerage arm between 2007 and 2012.

The pleasure manufacturer cites sales figures as their inspiration for this new offering. According to their press release, six percent of their 2014 online sales were delivered to financial offices and stock exchanges. And since people in finance can only be men, the toy is designed to fit a penis and comes with a pair of cuff links.

Despite the ten different vibration settings that would otherwise make it an excellent contender in the couple’s toys space, the marketing campaign for Pino is unambiguous about who is meant to benefit. Pleasuring a woman means a standing invitation to her bed, but there’s no need to invest in infrastructure when a man can cheaply outsource, right? The toy can worry about her orgasm.

“Sex is like money,” one of the ads reads. “Whoever gets the most by doing the least wins.”

The boxed set also includes a money clip engraved with the words “Always Be Closing,” a phrase popularized by Alec Baldwin in the 1992 film Glengarry Glen Ross — amazingly Lelo stopped short of reissuing their Luna Beads as brass balls, though you do catch a glimpse of the suggestion in Pino’s promotional video.

“Sex positive! Inclusive! I mean, exclusively for bankers, but — somehow inclusive!” writes veteran sex toy reviewer Epiphora. Referring to the Pino video, she adds: “In the constructed reality of Pino, women are just fucktoys that shitty dudes take home after getting wasted. Women are disembodied ankles and bitches who flip men off (but secretly want to fuck them). Women are vessels upon which men project their egos. Women certainly aren’t bankers.”